“Marketing is no longer about the stuff that you make, but about the stories you tell.” Brand expert Seth Godin perfectly summarized both the state of the media landscape and the key to conquering it with his quote above. The explosion of digital and mobile traffic coupled with the perseverance of long-standing traditional mediums like television and print has lent itself to a very cluttered environment. With people’s consumption growing and their exposure to content increasing along with it, it is incredibly difficult to stand out. The solution Godin provides of elite storytelling breaking through the clutter is critical to a content’s reach and digital life. However, I believe that it no longer can stand on its own. Expert storytelling is only rewarded when content is provided and promoted across multiple platforms and engages its consumers effectively. This can be achieved in a variety of ways.

A recent example of unique storytelling paying off was with Frito Lay’s “Do us a flavor” potato chip campaign. The initial idea of engaging their consumers to participate in the development process of their next chip flavor was a great idea in itself. But, what carried this message through and allowed it to reach as many people as it did was their domination of every media platform and outlet they could get their message out on. This doesn’t mean that they re-used the same graphic or call-to-action every time, instead they customized their content to the audience and environment that it was in. On their website they had voting and flavor curating stations that digital advertisements linked to.

In T.V. spots they had celebrity spokeswoman Eva Longoria legitimizing the contest and announcing the million dollar grand prize and where to find the participation details on their website. They also tapped into social media audiences with routine tweets and Facebook posts about the contest and the website. (Check out the social example below.) 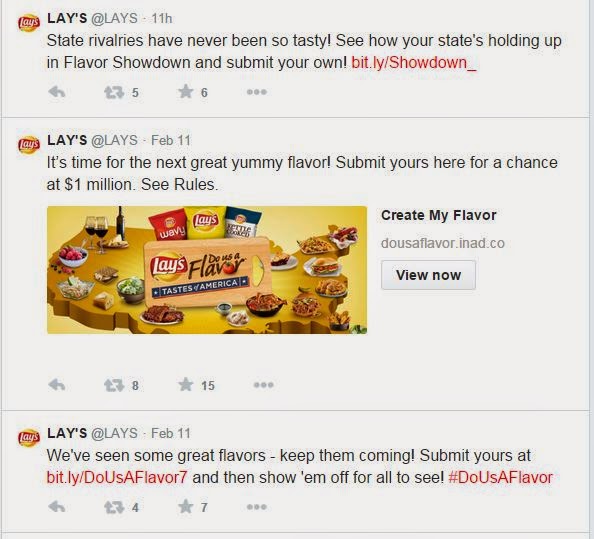 They even reached another audience of people with their outdoor billboards and experiential stunts. In NYC, they set up Lays chip stands where pedestrians could try the final flavors and vote on a winner. This further engaged the consumer and promoted their brand/product. However, while the cross-platform promotion got the message across to a large audience, it was ultimately Lay’s storytelling and the original idea to let their consumers actively curate their future that afforded their content the longevity it received in the media landscape. It was initially pushed through the cluttered environment, but it’s unique and thoroughly engaging storytelling is what pulled the brand into newscasts and countless online write-ups in business articles. The art of earning media is critical to any content’s longevity, whether it be earned business write-ups or active viewer engagement. Lay’s “Do us a flavor” campaign used unique storytelling, cross-channel promotion, and earned consumption/coverage to deliver an award-winning advertising campaign.

When multiple platforms are taken advantage of, a brand’s influence has no limit. This was definitely the case with AT&T’s “it can wait” no texting and driving campaign. This campaign could have soured if they did not cause enough of a social movement to motivate consumers to take the time to pledge. If they did not reach enough people, or if they didn’t brand the movement in such a meaningful direction where actual lives are at stake this campaign wouldn’t have been a blip on our radar. The promotional team for AT&T hit all platforms from the twitter hashtag “itcanwait” to several experiential stunts with virtual reality and simulations. These simulations put users behind the wheel of a car with the impaired vision and depth perception problems associated with extreme inebriation. They also had a large online presence with digital advertising and direct response ads that directed traffic to the campaign website and the It Can Wait pledge. Even with the mastery of all these various media platforms, this campaign still would not have won Cannes Lions and Webby awards if it weren’t for the expert storytelling the creative agency (BBDO) enlisted when they created the legendary commercial for the campaign. (https://www.youtube.com/watch?v=_bI6I1pfuCI) The television spot that they created was so jarring and devastating. It was a call-to-action for consumers that, even despite the cluttered media environment, you could not ignore. This is a perfect example of how important storytelling is to a piece of content’s success. This social movement needed a backbone to give credibility to their cross-channel blitz of advertising and this piece of art was the perfect way to connect the movement across every platform. People were streaming this video online, watching it on their T.V., and seeing the campaign displayed on billboards lining the very highways they might even be texting and driving on. With a message as visceral as this campaign’s, the repetition successfully reinforced the gravity of the consequences texting and driving have. Lives were and are at stake, so the campaign approached the subject with the severity and immediacy it demanded. The expertise in these advertisers’ approach to the movement payed off in spades with people all across the country signing up online and promoting the event with their followers socially. 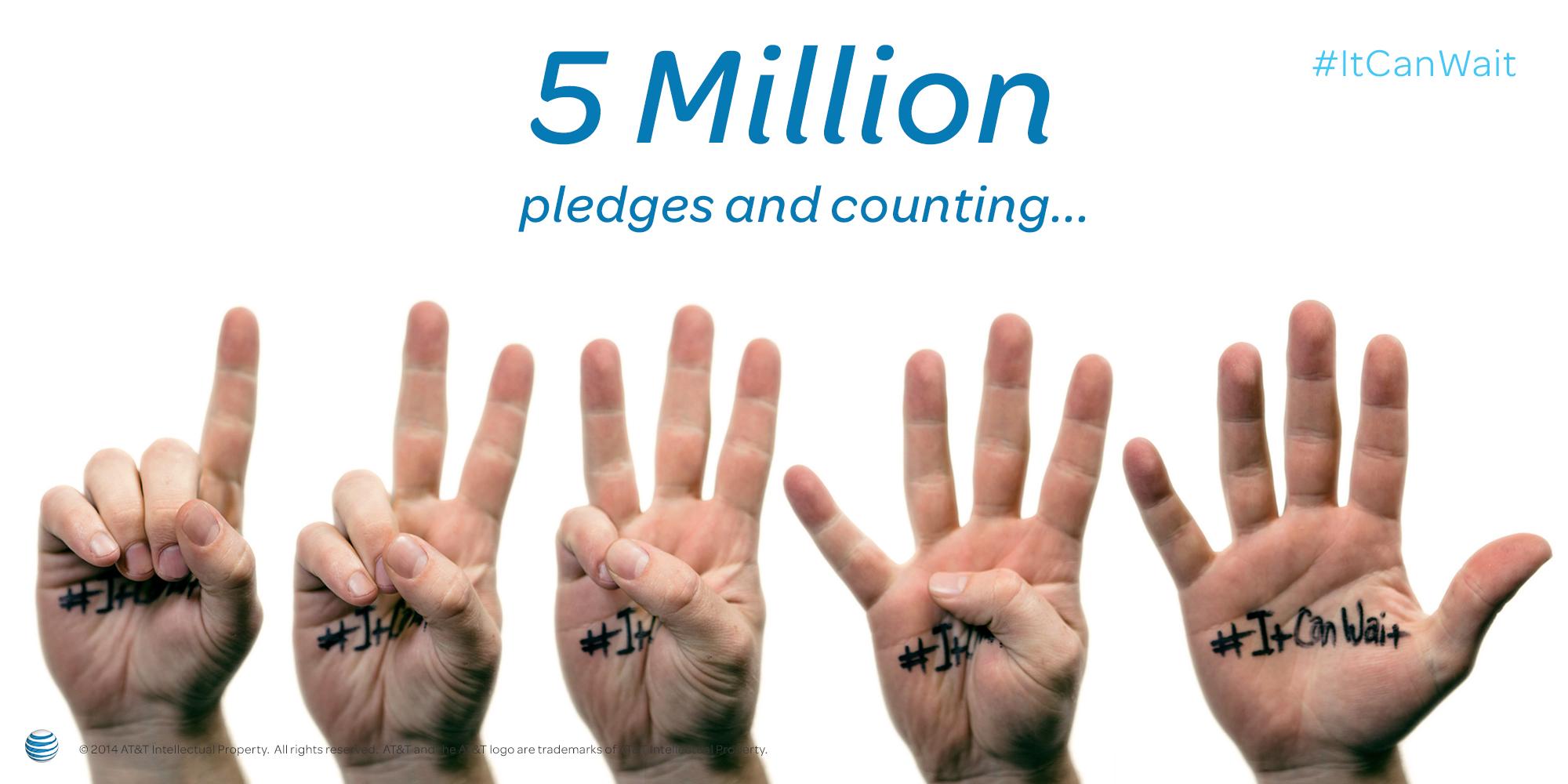 From an advertiser’s point of view, the best part of creating a visual ad that has a unique and impressionable message is the ability for your work to earn its own media. This was definitely the case with AT&T’s campaign because once the video went viral online, traditional media outlets were spotlighting the movement on their nightly broadcasts.

Especially with social responsibility causes, people want to do good, so it is our job as advertisers to give consumers the chance to engage with our message. Put the movement in front of their eyeballs, with the right execution, and with the appropriate sensitivity required. What made AT&T the real winner in this scenario was that they were able to spread a positive message to their users, while also building brand awareness and likability.

Overall, in order to cut through the chaos involved with today’s entertainment landscape, marketers must go above and beyond. It is not enough to place an ad of T.V. and assume everyone saw it. According to Nielsen, “62% of North Americans now use a second screen to browse the Internet while watching TV-video programming, and 39% say they keep up with TV shows by using social media.” T.V. is no longer king, and advertisers need to be present on all platforms in order to have a truly integrative and successful campaign. With that being said, the job does not stop there. Anyone can just place an ad, it takes true marketing skills to target the right people, at the right time, with the absolute best message. Finally, as Mr. Godin alluded to at the beginning of my blog, storytelling is really what makes or breaks a content’s longevity. It is the quintessential neatly tied bow and cherry on top. Without it, a campaign or message loses its lasting power and fails to deeply resonate with audiences.